Mighty Swiping Shiba Force is a free to play game that lets you play as one of the three members of the Shiba Force, a powerful team that resembles old Sentai shows like the Power Rangers or Samurai Pizza Cats. The team’s main objective is to defend their city against an army of evil cats that won’t stop until everything is destroyed.

The premise of the game is simple, use your finger to swipe the enemy cats coming at you before they touch you or is game over, but don’t think this will be an easy task since the enemies will not stop coming and the difficulty starts to go up as more types of enemies will come your way with different abilities that will make you stay on your toes while playing the game. There are also two mini games that begin every time a wave of cats ends, the first mini-game will make you test the precision of your swipe as you have to stop bombs thrown at you and the only way to do this is by cutting their fuse before they blow up, but you have to be careful not to touch the bombs or they will explode instantly.

The second mini-game is a duel against a boss cat that will test your reaction time and your patience, first you will have to wait until the game tells you to swipe the screen, but you have to be quick since the boss will kill you if don’t swipe right away.

The game lets you choose between using the standard sword wielding character or you can also use the other two members of the team. Each one of them uses a unique weapon that is purely cosmetic but seeing the different animations maintains the game fresh.

While playing the game you can win coins that can be used to buy new weapons on the store, these weapons come in a variety of prices, where the most expensive weapons will change the visuals inside the game. These go from shaking the screen to transforming the enemies into food whenever you swipe on them and there is even a weapon that lets you turn on a big head mode, a classic mode on old games where all the characters would have an enormous head while their body stays the same.

At the end of each game it will offer you to watch an ad in exchange of one try in the gashapon machine. This machine will give you a random prize each time you play it, the prize can go from gaining coins to even a special weapon.

The last update of the game also offers leaderboards so you can compare your high scores with your friends and compete to see who can reach the higher difficulty levels. The last update also brings a new mode called Master, that you can unlock after defeating three waves in the classic mode. The new mode lets you start on a higher difficulty and doubles your score so you can get more coins at the end of the game. This new mode is a good alternative if you feel that the classic mode is too easy at the beginning.

You can watch the trailer of the game here:

The game is available on Google Play and iOS:
iOS: https://itunes.apple.com/us/app/mighty-swiping-shiba-force/id968908722?l=es&mt=8
Android: https://play.google.com/store/apps/details?id=com.Bromio.Shiba 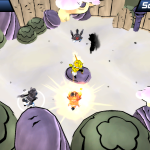 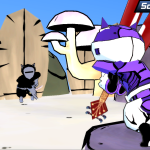 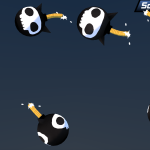 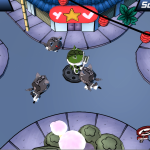